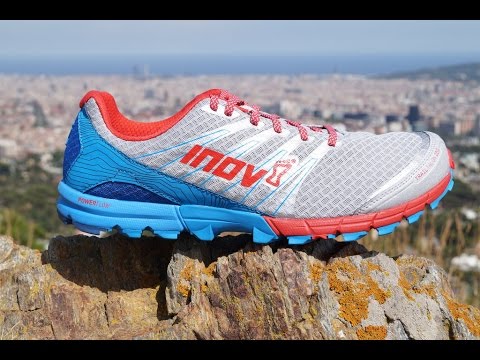 However, the open weave also allows water to get in – rain, puddles and dew alike. This is a bit annoying, and I simply tend to avoid wearing my Trail Talon 250 when I know there is moisture around. Especially in the autumn/winter when they get too cold for my liking.

What bothers me the most about the upper though, is that it lets in fine-grain grit and sand. In my opinion, they are simply not suitable for sandy/dusty conditions even when wearing gaiters.

On shorter runs it’s okay, but once you go beyond 20-25 km the sand/grit getting into your shoes becomes an issue. I have chosen (more or less consciously) to simply bypass the Trail Talon 250 whenever I know the route to be sandy and over 20 km. This is disappointing for a trail shoe clearly marketed towards ultra trailers.

The outsole consists of a central area (red and dark blue) with three mm, triangular-ish lugs with straight vertical edges. This should, in theory, give traction both forward and backward.

Along the edges of the sole is a band of larger more aggressive looking lugs. They are edged backward on the forefoot (offering traction for forwarding motion), and vice versa on the heel.

Despite the visually impressive lugs and a rather progressive look, it is my impression from many runs that you don’t get overly much grip. The reason for this may be the type of trails that I run.

It may be because I unfairly compare them with the X-Talon. Some reviewers praise the Trail Talon for their traction. I simply don’t find them any good in slippery conditions. This is in accordance with for example iancorless.org.

The Trail Talon 250 comes with the Inov-8 gaiter attachment system. Minuscule upside-down pockets on either side of the shoe. This allows attaching suitable gaiters (e.g. Inov-8 Ultra) without the annoying string/elastic under the foot.

This is a very nice feature. The only issue I have had is the plastic hooks on the gaiters breaking because they are made of a brittle type of plastic. It has happened to me twice while running on rocky terrain (riverbeds/beaches). That, however, is not a fault on part of the “gaiter attachment pocket” on the shoe.

Some other brands of trail shoes have their own similar systems, for example, the so-called “gaiter trap” by Altra. It would be nice though if someone invented/ standardized a solid (light-weight) gaiter hook/attachment system. That way you wouldn’t need brand-specific gaiter/shoe combos.

At first, I did not like the Trail Talon 250. They felt stiff, flat, and way too roomy – front, back, and center. They did not compare to the nice snug foot-hugging fit of the X-Talon 212. They were not nearly as comfortable as my old more well-cushioned Saucony shoes.

There was ample room for the toes – which was nice. But the overall loose fit gave very little control on technical trails. I was in other words sorely disappointed because I was expecting a similar fit to the X-Talon, yet with a smoother more cushioned ride. None the less, having paid full price (which was reasonably steep) I decided to give them a chance to redeem themselves. That was a wise decision!

As of today, I have run a total of 939 mostly pleasant kilometers in Trail Talon 250. They have – despite my first dire impressions – somehow run a fair distance without much fuss. No blisters, no injuries, no physical discomfort. The single most remarkable thing is that I can’t recall any particular issues what-so-ever. They have simply worked flawlessly the entire time.

In hindsight, I think the key point has been identifying their “niche”. I quickly established what I could use them for and stuck to that – and only that.

The Trail Talon 250 is not your go-everywhere, all-round ultra type shoe, as it to some extent was cracked up to be. It is a low-stack, low-drop trail-shoe for fast, easy untechnical trails.

Dry, hard-packed trails, gravel-roads, paths, parks and mixed road-to-trail type stuff. If you stick to this type of run; you’ll have a nice light pair of trail shoes that will take you safely and comfortably for many runs. Nothing more – nothing less.

As mentioned above I have done almost a thousand kilometers in my Trail Talon 250.

This is well above the generally (magically) recommended 3-500 miles. The upper shows very little wear despite the rather high mileage. That may well be because I have never challenged them much (upper-wise) as I tend to leave them at home when going for wet/rugged/technical runs.

The outsole shows a bit more wear because they have seen their fair share of hard surfaces (road-to-trail). The wear is also uneven indicating that it is not the shoes fault. Most likely the outsole-wear is due to a combination of how I strike the ground and my personal running style (or lack thereof).

Similar to the upper there is some wear but no holes or breakages inside the shoe. Tongue, cushioning, heel cup – everything used but intact. In conclusion, the Trail Talon 250 are durable, solidly built, value-for-money shoes.

Statistically speaking the difference is not significant though. Especially considering the obvious running-condition bias, i.e. I use them on easy/fast trails only.

In comparison to other racing flat trail shoes the Trail Talon 250 does not stand out, nor are they overly fast. I’d recommend the Terraclaw 220 instead if you want to stick to Inov-8. The only argument for the Trail Talon in that comparison would be better underfoot protection (sharp rocks go away), which the Terraclaw lack somewhat. That extra protection costs a bit of weight though.

Should you get yourself a pair?

If you are in the market for your first (or only) pair of trail running shoes I would not recommend the Trail Talon 250. I’d go for a more all-around type trail shoe – something like the Salomon Speedcross, Saucony Peregrine or Brooks Cascadia. Of course depending on what type of runner you are, and which conditions you prefer.

If you do require something low-stack/low-drop go with New Balance Minimus or one of the shoes from the Merrell Bare Access range. They are both lighter and in my humble opinion more versatile.

I have found the Trail Talon 250 to be rather pricey and have a somewhat limited usage spectrum. They have their rightful place if you (like me) have an arsenal of trail shoes and pick the right shoe for the right job. If you only have one or two pairs of running shoes doing everything from mud to roads – you’d probably want them to be more all-round than the Trail Talon 250.

The Trail Talon 250 is a medium-to-fast shoe suitable for easy trail runs of short to medium length. Nice and cool for warm and dry summertime runs. Not suitable for wet, sandy or muddy conditions – especially not when cold.

I have had plenty of enjoyment from my Trail Talon 250, but I’m not in the market for another pair once my current ones retire. That last statement pretty much sums up my overall impression of the Trail Talon 250.

|Level 4 expert Verified Hi, I’m a recreational ultra trail runner doing some 2000+ km per year, almost exclusively on trails. I did my first marathon in 1995 and my first ultra in 2001. I run to exercise my body and relax my mind. I love to reach that blissful state when there is nothing but you and the trail, and once you get to your destination you can’t recall how you got there and how much time has passed. I’m a gear-freak and running shoe aficionado and regularly browse the web for inspiration and good deals.”},{“descr1”:”La Inov-8 Trail Talon 250 es una zapatilla para correr ligera que está optimizada para los senderos. Cuenta con algunas tecnologías y componentes listos para los senderos que le permiten llevar a los corredores por caminos todoterreno con facilidad. Se utilizaron materiales de alta calidad para este zapato, lo que lo hace duradero, formidable y duradero.